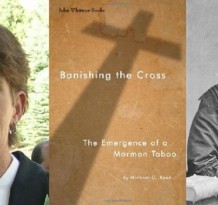 Today I sit down with Michael Reed, author of “Banishing the Cross: The Emergence of  a Mormon Taboo”.  We talk about How the cross was portrayed early in Church History, Why it becomes a problem, and Where are we at today.  We also hint at where we might be going. This issue is a microcosm of false assumptions and getting off track at large.