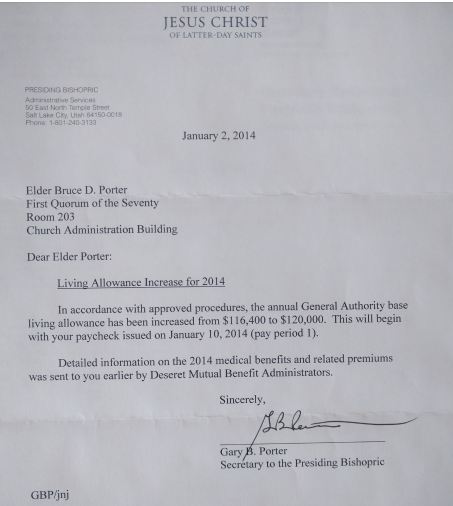 Recently due to some leaked documents the general membership learned at least roughly what our leaders get paid.  We know that Elder Eyring in the year 2000 was paid roughly $90k and that in 2014 all top male leaders were informed that they were having their “base living allowance” increased from $116,400 to $120k.  The conversations have been extremely binary in that both sides can’t begin to see the other sides perspective.  Sadly it is when we fail to empathize or understand another’s view that we lose a piece of our humanity.  Today I would like to delve into these issues in depth while being succinct and short.  I hope to offer both viewpoints and some middle ground. 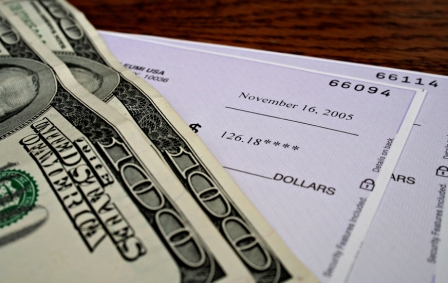 – For many this is the first time they have had to come face to face with the fact that these men are paid.

While many of us were aware of their status as “paid clergy”, we should keep in mind just how much our message was slanted towards lay members being given the message that our church was completely an unpaid ministry.  Do a search on LDS.ORG for “unpaid clergy” or “unpaid ministry”, then try to find any articles that inform the membership its leaders are paid?  To save you time it is approximately 17 articles overstating our Church as having a unpaid ministry and 1 article where President Hinckley in passing states that the leaders do receive a “living allowance” that “is modest in comparison” to that of executive positions in big business.  Can you see why members feel led to believe their leaders were not paid at all?  If the very leaders who are paid unbeknownst to you say from the pulpit that we have an unpaid ministry, is it not the normal conclusion to make that those same men are part of that unpaid clergy?  Even recent manuals like “Preach My Gospel” state “All of the work in the Church is voluntary. No one is paid for such service.”

Can you grant these folks not only came to this perspective honestly but that in some ways we could acknowledge the Church could have done better and been more thorough and upfront about such?

When we inform the general membership that a leader gets a “modest stipend”, what thoughts does that invoke?   Even when on one single occasion we say modest in comparison to XYZ that still leaves a large spectrum of possibilities.  Again our lack of transparency seems to have bitten us again.    The apologetic response is two fold.  #1 These men left careers that paid higher so hence this $120k is modest to them and #2 These men work hard for the Lord so whatever amount they get, it isn’t enough and it should not bother us.  I hear both of those and validate that is one perspective to hold.  Can you validate that such responses seem to ignore scripture, seem to ignore just how impoverished some members of the Church are and how it might look to them, and it ignore the frustration one might feel having gone through their life paying tithing first even when there wasn’t enough for food or other essential needs?  Rather than judge these folks can you sit with them for just a moment and see how one might have feelings of anger or sadness to learn just how much these men make?

– How Modest is the “Modest Stipend”

Many heard that the Leaders made $120k and simply left it at that.  Since the Church is not really having an open discussion about what leaders are paid in totality it is left for us to guess.  First we know the $120k was in 2014.  Which means assuming there were three more “base living allowance” increases or 1 per year we could safely assume the pay is in 2017 around $127,500.   We also know because the 2006 Mission President’s Handbook was leaked a few years ago that extra perks come with paid Church Leadership.
– 100% reimbursed secondary education at BYU )or you can get that amount towards another college)
– you can hire a housekeeper for up to 20 hours a week with 100% reimbursement
– you can hire a gardener which is reimbursed by the Church.
– We can see from Elder Eyring’s paystub that beyond is “base living allowance” that there are other paid benefits such as a “Child Allowance” and Parsonage”.  We also recognize that their travel and lodging are reimbursed (rightfully so I should add).
– Most if not all of these men are also collecting a pension from their secular career which is in and of itself likely $50,000 to $100k.

When it is all said and done, it is likely that at least some of these men have incomes reaching $230k or more.  This places them in the top 5% of America’s Wealthiest.  Whatever it is they got paid in their secular careers and now in their Church calling, these men have the means to live very well off.  I hope you can see from that, that we should avoid the term “modest living stipend”.  It is deceiving and misleading.  I hope we can just own the fact that our leaders are well paid and that they live among the Financial Elite in this country.

–  Our history regarding a unpaid clergy

Saying this as if it is a sign of the true church is misleading.  Here’s why.  Our Bishops used to be paid.  They would be paid 8% of the total tithing collected in their ward.  Stake Presidents used to be paid 3% of the tithing collected in their stakes.  Stake Patriarchs would charge $5 per patriarchal blessing.  All this history can be read here.  So it really is a poor point to prove to your members and to the public that such somehow makes you better than someone else.   As a broad statement, saying we have an unpaid clergy is both false historically and in the here and now.

– It doesn’t come from tithing dollars

This is the response when their income is pointed out as if this makes it all better.  The frustration is that members like me want to have a conversation to better understand this argument.  For example if the monies used to pay these men come from the business arm of the Church and not tithing donations, where did the monies come from that initiated that business venture?  Another question I want to ask is does the Church consider the interest earned of tithing donations to be tithing money or is that non-tithing income?  In the end I am highly doubtful that is we walk any of these incomes to their beginning that they are not originating with Tithing monies donated by the members of the Church.

– The implications of scripture

another angle of frustration is when a member of the Church seeks out within the scriptures to learn what is to be expected in terms of financial perks for Church leaders.  The reality is they need to eat.  They need a roof to rest their head under, and they need the other essential items of life.  What the scriptures point to though is they should not have an overabundance.  They should not live off the backs of the people.  And they should not make so much that one has to wonder where their focus is.  Joseph and Sidney Rigdon once instituted a paid income for themselves of $1,100 a year which was 3X’s the salary of the worker of the day.  They put it before the Church for common consent and it was rescinded.  Strangely we not only do not put such things up for common consent anymore, we don’t even inform the members of the pay their leaders receive.

After negotiations, they agreed to offer Rigdon and Smith an annual contract of $1,100 apiece, more than three times what the average worker of the day could earn. Ebenezer Robinson, the High Council’s clerk, later wrote that “when it was noised abroad that the Council had taken such a step, the members of the Church, almost to a man, lifted their voices against it. The expression of disapprobation was so strong and emphatic that at the next meeting of the High Council, the resolution voting them a salary was rescinded.” (Richard S. Van Wagoner, Sidney Rigdon, Pg 230.)

To Conclude Joseph Smith once taught

“The only principle upon which they judge me is by comparing my acts with the foolish traditions of their fathers and nonsensical teachings of hireling priests, whose object and aim were to keep the people in ignorance for the sake of filthy lucre; or as the prophet says, to feed themselves, not the flock.”  – Prophet Joseph Smith, Jr., The Teachings of the Prophet Joseph Smith, p. 315

Folks like me who have a hard time with such things deeply worry about the ignorance of our membership and the effort on the Church to keep us there.  Such neglect of transparency and of presenting a whitewashed simple story has led to so many topics in recent years disturbing the faith of our members.  We can do better.  We can be better.  When I see that many Church leaders are related to each other and that they are likely in the top 5% financial echelon of one of the World’s wealthiest countries….. If I am honest….. I must admit it concerns me.

May the Lord warm your shoulders,

9 thoughts on “POST: Not So Modest Stipends Stifling Faith”