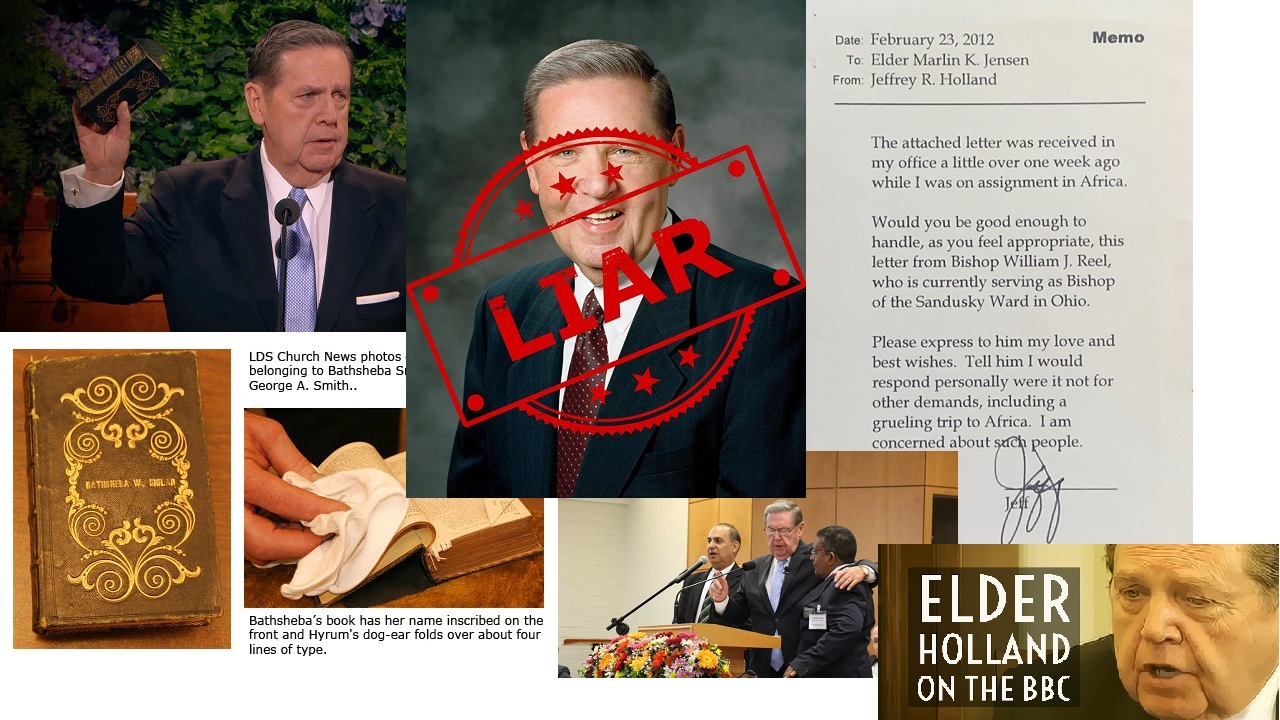 Today we explore Elder Holland.  First I discuss the personal relationship Elder Holland and I have/had.  The trouble is once the biased lens of Mormonism was shed from my eyes I began to realize something else about Elder Holland which is that he seems to be deceptive and flat out lying on multiple occasions.  And often about small things that seemed to indicate a person who easily decides and chooses to exaggerate and deceive.  We review five examples in this episode and some of this are absolutely demonstrable.

1.) Elder Holland claims to hold the very copy of the book of Mormon that Bethsheba, Hyrum Smith’s wife, had in her possession from which Hyrum Smith the prophets brother read to her and had turned the corner of the page down from where he read.  The problem is that the copy Elder Holland holds up in his hand at General conference is distinctly different from the copy in the Church History department claimed to be the same book.
RESOURCES:
– https://www.flickr.com/photos/nickleus/sets/72157623567278714/
– Safety for the Soul conference Talk
– http://www.salamandersociety.com/foyer/prophets/jeffreyrholland/

2.) Elder Holland when asked about the Church’s contribution to Prop 8 says that the Church did not give “One Red Cent” to the fight against Same Sex Marriage in California.  Problem is it gave a reported amount of almost $200,000.  Some want to debate over whether it was cash or in kind donations but to battle over rhetoric seems to be a sly way to find a loophole.
RESOURCES:
– https://www.mormonnewsroom.org/article/same-sex-marriage-and-proposition-8
– https://www.huffingtonpost.com/fred-karger/mormongate—-the-churchs_b_163016.html
– http://www.missedinsunday.com/memes/lgbtq/proposition-8/
– https://www.nytimes.com/2008/11/15/us/politics/15marriage.html
– https://www.dailydot.com/irl/mormon-church-gay-marriage-prop-8/

3.) Elder Holland tells a faith promoting story about a missionary who out on his mission is led by the spirit to his older brother who had severed his relationship with his family years earlier.   Elder Holland had told this story for years and other General Authorities before him had shared it.    The problem is the story was a false faith promoting narrative.  Each telling contained different contradicting details and too far fetched too believe of a story-line.  Soon after the Deseret News picked up on the story, the far fetched details began to be questioned by critical thinking Mormons and Elder Holland through the Deseret News and Church PR quickly distanced himself from the story.  But even his side of how he came to learn the story was inaccurate is problematic.
RESOURCES:
–  Cache of Original Story
– https://www.deseretnews.com/article/865685840/Elder-Holland-withdraws-Church-News-missionary-story.html
– Radio Free Mormon Episode detailing the deception
– http://kuer.org/post/mormon-apostle-withdraws-embellished-story#stream/0
– Bill Reel’s questioning the validity before Elder Holland’s retraction

4.) Elder Holland when asked directly whether Mitt Romney would have made penalty oaths in the temple answers NO.  Problem, such is a flat out lie.
RESOURCES:
– Youtube Clip showing the lie
– https://www.cityweekly.net/BuzzBlog/archives/2012/06/05/bbc-interview-with-lds-leader-earns-controversy
– https://www.reddit.com/r/mormon/comments/7c2tuq/did_holland_lie_semantic_analysis_of_jeffrey_r/
– Jonathon Streeter’s dissection of this event

5.) Elder Holland in a Regional meeting claims that the Church is growing in such a rate that it is creating Double Digit NEW Stake creation “every week of our lives”.  The Problem is that the Church every year tells us the number of stakes in the Church at year end of the previous year.  Elder Holland made this claim in early 2015 And from 2015 through 2017 the church consistently averaged 1.6 new stakes per week.  This makes a fifth lie with this one being deeply demonstrable.
RESOURCES:
– The Youtube video of his claim
– Apologetic response – The owner of this blog is trying to reconcile the claim and as you will see relies on anectdotal data as he struggles to have any real source for the claim further showing how much of a stretch the claim is
– Conversation by Bill Reel searching for a way to reconcile this issue
– Data exploration on this issue
– Bill Reel Facebook post on such

In conclusion one is left with their jaw on the floor trying to figure out why Elder Jeffrey R Holland is an habitual liar.